Parade And The Velvet Gentlemen 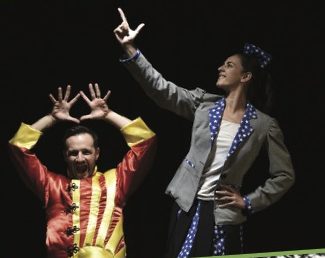 The show celebrates the 100th anniversary of the ballet ‘Parade’, premiered in 1917 by sergei diaghilev’s ballets Russes at the Théâtre du châtelet in Paris. This 20th century masterpiece features the music of erik satie scored to a one-act scenario by Jean cocteau with costumes and sets designed by Pablo Picasso. This new version of ‘Parade’ revisits the ballet on an interdisciplinary platform, embellishing the choreography with stop-motion animation, puppetry and projection dancing. The performance includes other works by satie, known by his contemporaries as ‘the velvet gentleman’. The programme includes some of his masterpieces for the piano such as Gymnopédies and Gnossiennes as well as works pre guring the minimalism of steve reich and the incidental music of John cage.